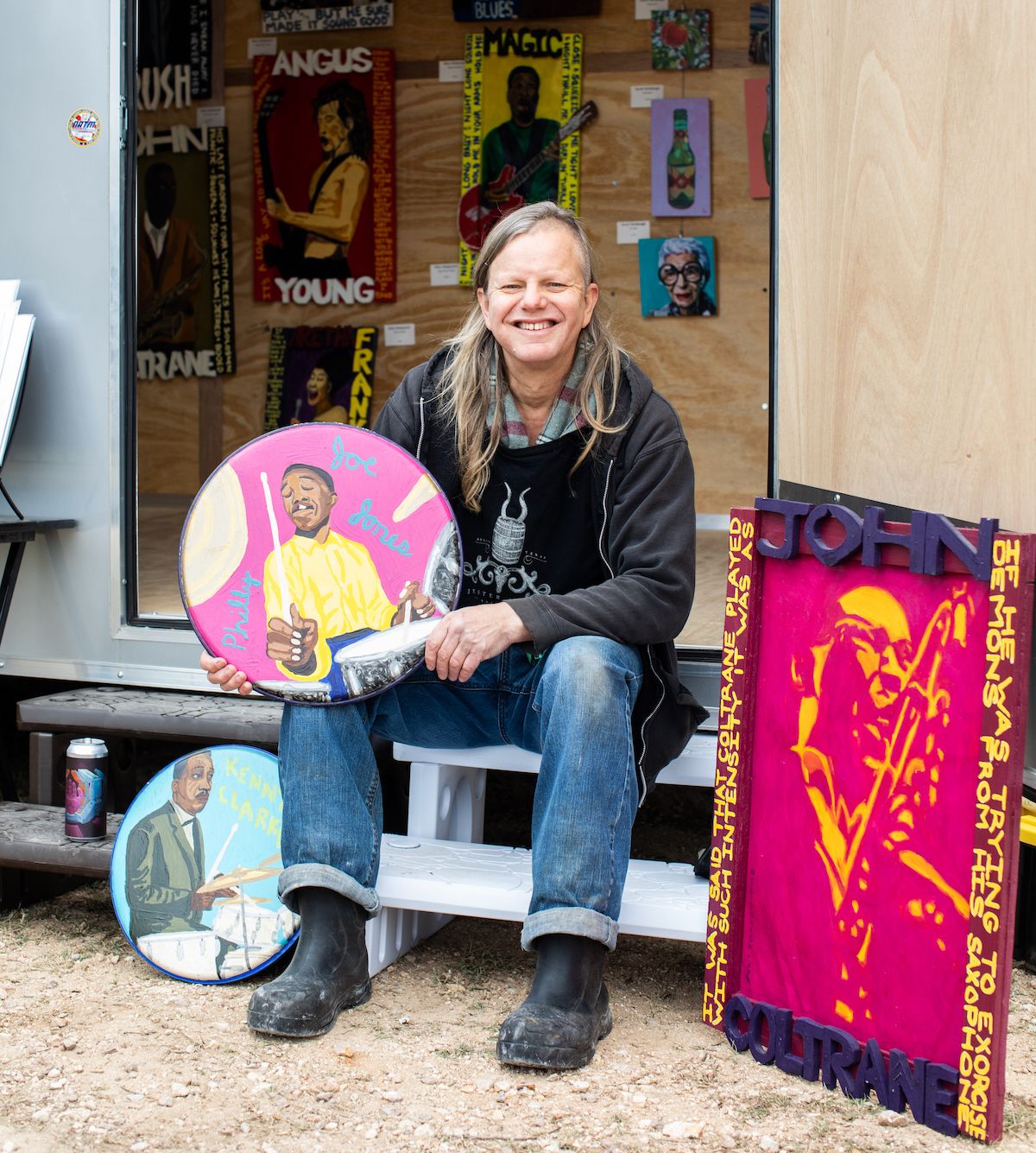 Our philosophy at Jester King is strongly rooted in creating a sense of community and place, by tying our guests’ experience to a time, place, and people. Whether dining onsite with friends and family, eating hearth-baked Hill Country sourdough bread that you picked up curbside, or enjoying one of our beers purchased from your local retailer, our intent is to build a memorable connection and experience with our guests and community.

We could not foster these relationships without the people who work tirelessly every week at Jester King, from the front of house to our kitchen, our production team to our artists, and many more. With this in mind, we continue our Jester King staff spotlight series so you can get to know our team. This week meet one of our brewers, Marc Nelipovich!Marc is a native Texan from Houston. He’s been brewing at Jester King for over eight years. While not at work, Marc plays music and creates art. You may have seen Marc playing drums at Jester King with the band Moving Blues (aka El Michael and the Moving Blues) or seen his art residing in the Blue Sky Art on Wheels trailer at the entrance of the brewery.

In early 2001, Marc began creating art of his own, inspired by outsider art that he’d seen around the country. His designs are a combination of his love of music and folk art. The art is created in honor of, in celebration of, and as a tribute to the musicians that have inspired him. He has created paintings of musicians from Robert Johnson to Miles Davis, Frank Zappa, Madonna, Angus Young of AC/DC, and even classical composers like Erik Satie, Hector Berlioz, and J.S. Bach. Writing on the frames is another way of expressing how a particular musician or music has affected Marc’s life. The words on the frames are sometimes lyrics, quotes from the musicians themselves or from journalists, song titles, background information, or historical information about the particular artist or their compositions. Oftentimes, pieces include” found” elements, such as guitar/bass strings, guitar parts, and harmonica parts. He also started a series of pieces painted on used drumheads titled “Drummers on Drumheads” which was featured online on DRUM! Magazine.

Find out more about Marc in the interview below:

I have worked at Jester King for over 8 years. Currently, I am one of our brewers.

What is your background?

I was born in Houston, Texas and have lived in Englewood, Colorado. I have earned a Bachelor of Music degree from Berklee College of Music (Boston, Massachusetts), but I have also attended college at UNT (Denton, Texas), and Sonoma State University and Santa Rosa JC, in California.

What attracted you to working at Jester King?

Back in 2013 laws changed in Texas so that breweries could sell their own beers onsite, rather than the old "buy a glass and get X number of free samples." Jester King Brewery was a key player in getting those laws changed in Austin. I was between jobs at the time and a friend who was bar manager at Draught House, Constanze Chicon, encouraged me to apply at some breweries saying "you know about beer." I quickly learned how much I did not know about beer, brewing, and its vast history.

What does our philosophy of “time, place, and people” mean to you?

We make beer that is uniquely tied to the land around our brewery. Our brewing schedule often follows the seasons using ingredients particular to a specific season. We use native yeast and bacteria to ferment the majority of our beers, wines, ciders, and meads. And our brewers and production team work together to create our blends. Also, we try to incorporate the kitchen staff for ideas and processing, when possible, to create very new and unique fermentations. Of course, only staff that is knowledgeable about what we do can truly sell our uncommon fermented beverages and educate our patrons on our philosophy.

What do you love most about working at Jester King?

The creativity of what we do is what I love most about Jester King, and of course our staff. I also love being out in the country.

Moderne Dansk, Montmorency v. Balaton, Snorkel, our different melon beers, and wine co-ferms are probably my favorites to name a few. Mason and the kitchen team are making some incredible and unique pizzas, and of course the smoked brisket and beans are stellar. Our new baker Jacob is making some incredible baked goods as well. There is too much great stuff to mention, and sometimes I miss the best stuff before it's gone. Keven is rolling out some very tasty cocktails too. So much great stuff to try!

What else do you enjoy drinking?

I want to travel the world more. Go to Alaska, Greece, Portugal, Peru, to name a few. There is nothing like a good dose of a different culture to wake up the creative juices and inspire you.

What do you like to do in your spare time?

Most anything creative. I cook a lot. I love almost anything involving music: listening, practicing, learning, performing, singing, studying. I also paint when I get a chance...primarily musicians. I also like to read.

I Can’t Live Without:

A catalog of my art can be found on my Facebook page in the album Art Work. Moving Blues (aka El Michael and the Moving Blues), the blues band I primarily play with, has albums on Spotify and Apple Music. I also perform with a classic rock band, The Clutch Kings and used to perform with a cow-punk band, ConvOi! 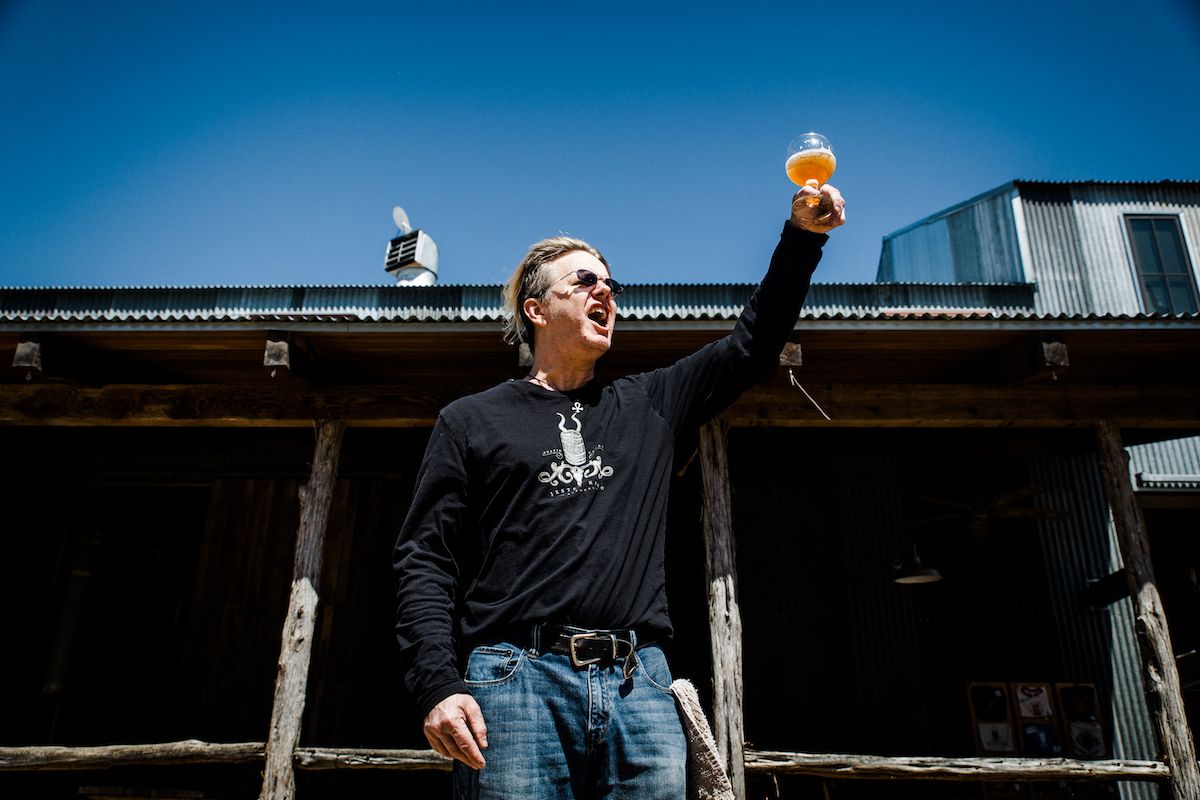