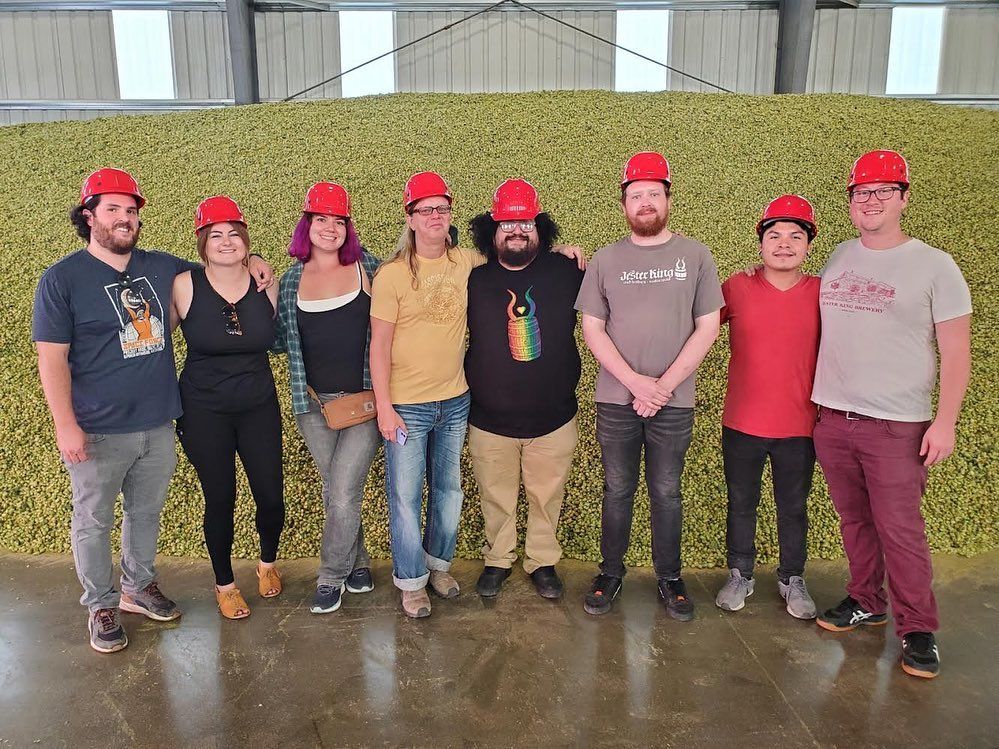 Part of our brewing team is out west in hop country right now. They’re touring hop farms in the Yakima and Willamette Valleys. Our visit coincides with the 2021 hop harvest in the Pacific Northwest. This is our first ever visit.

We’ve had a focus on hoppy beers since we opened in 2010. Noble King and Le Petit Prince are fundamentally hoppy beers, inspired by the dry, drinkable, bitter, aromatic, hoppy beers from breweries like Thiriez, De Ranke, De la Senne, and Dupont. But as we and the beer world have grown and matured, we’ve diversified the range of beers we make. These days, we’re just as excited about making pale lagers and IPAs as we are about farmhouse ales and wild fermentations. We began brewing these styles in October of 2019. As our knowledge and skills have advanced, we’ve realized the importance of hop terroir – i.e. the character derived from specific farms with their own growing conditions and microclimates. This is not to suggest that regional or farm-specific hop character isn’t impactful in farmhouse ales. It definitely is! But in the context of pale ales and IPAs with their pure culture fermentation, the microscope is more tightly focused on the character of specific hops grown at particular farms.

This is what led us to head out west this week to hop country to learn, see, touch, smell, taste, and converse. We were aided by our great friends and IPA savants from Celestial Beerworks in Dallas. It’s been very cool to learn from them, which speaks to the enduring comradery and openness in the beer industry. We’ve been told time and again that this openness isn’t common in other industries.

While we’re in hop country, we’re making sure to pay a visit to The Oregon Hophouse in Aurora south of Portland. Patrick Leavy there has been growing and supplying us with organic Golding, Fuggle, Perle, and Liberty for our farmhouse ales since 2010. We’re grateful to have featured the hops from his farm in our beers for over a decade, and we have a batch going right now with some new experimental hops from his farm.