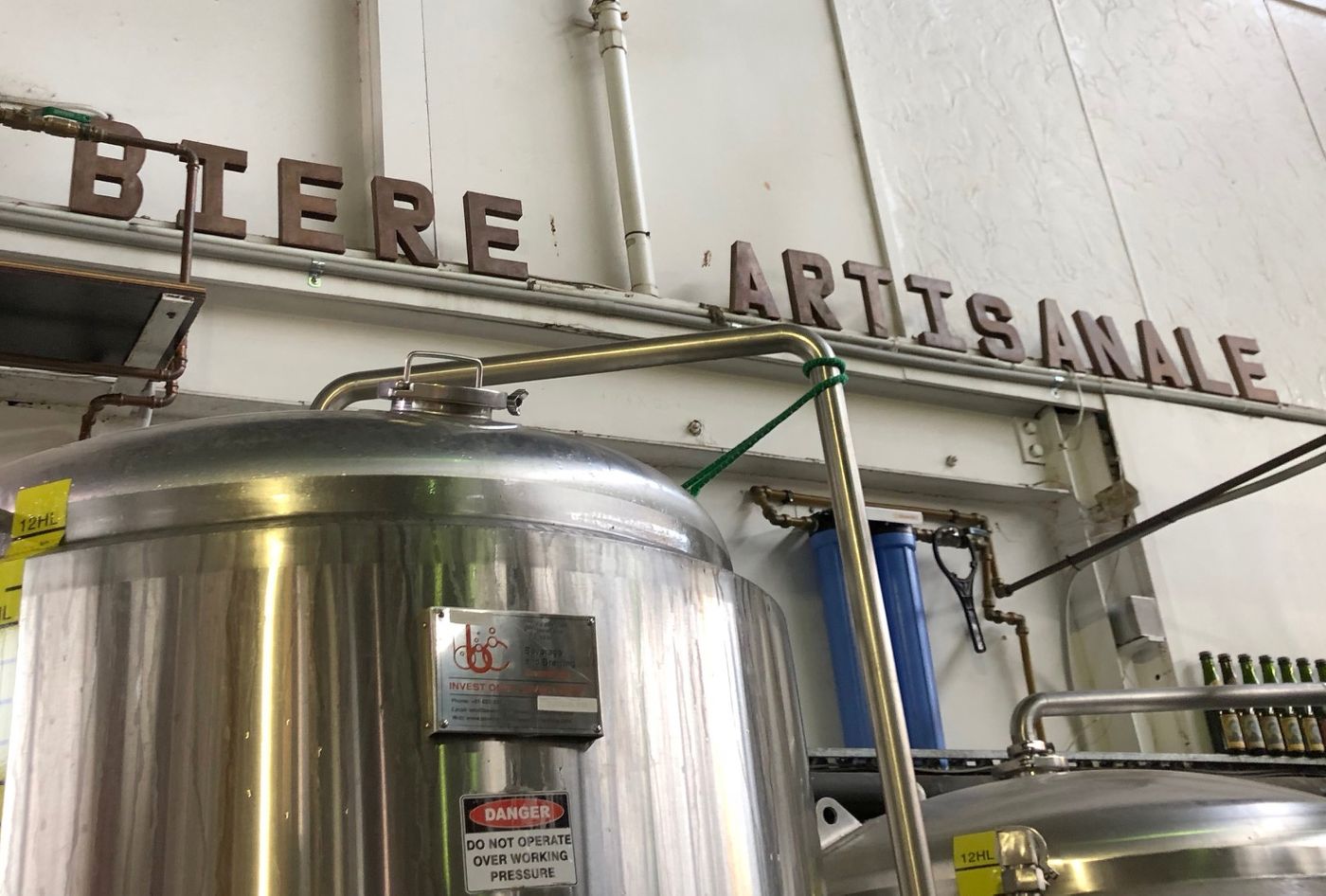 Last week, we had the pleasure of visiting and brewing with La Sirène brewery in Melbourne, Australia! We brewed two beers together -- a 100% spontaneously fermented beer with aged hops from the northern and southern hemispheres, and a hoppy farmhouse beer with cultures from Jester King, La Sirène and Wildlife Bakery.

We first met Costa Nikias, the co-founder of La Sirène, back in 2015 when we participated in the Great Australian Beer Spectapular. Our philosophical connection to Costa and La Sirène was apparent from the start and a friendship quickly developed. Costa came to Jester King during the spring of 2016 to brew Song of Binding -- a beer inoculated in our coolship, pitched with our mixed culture, then aged in French oak Pinot Noir barrels as a nod to Costa’s winemaking background. After brewing Song of Binding, we told Costa that one day we’d return to Australia to brew with him, and that time finally arrived last week.

La Sirène is a brewery that focuses on wild and spontaneous fermentation. They’re a modern pioneer of this approach in Australia, having started about eight years ago. Every wild ale they make spends primary fermentation in an open-top oak puncheon or stainless steel tank, where the beer is in contact with airborne cultures. 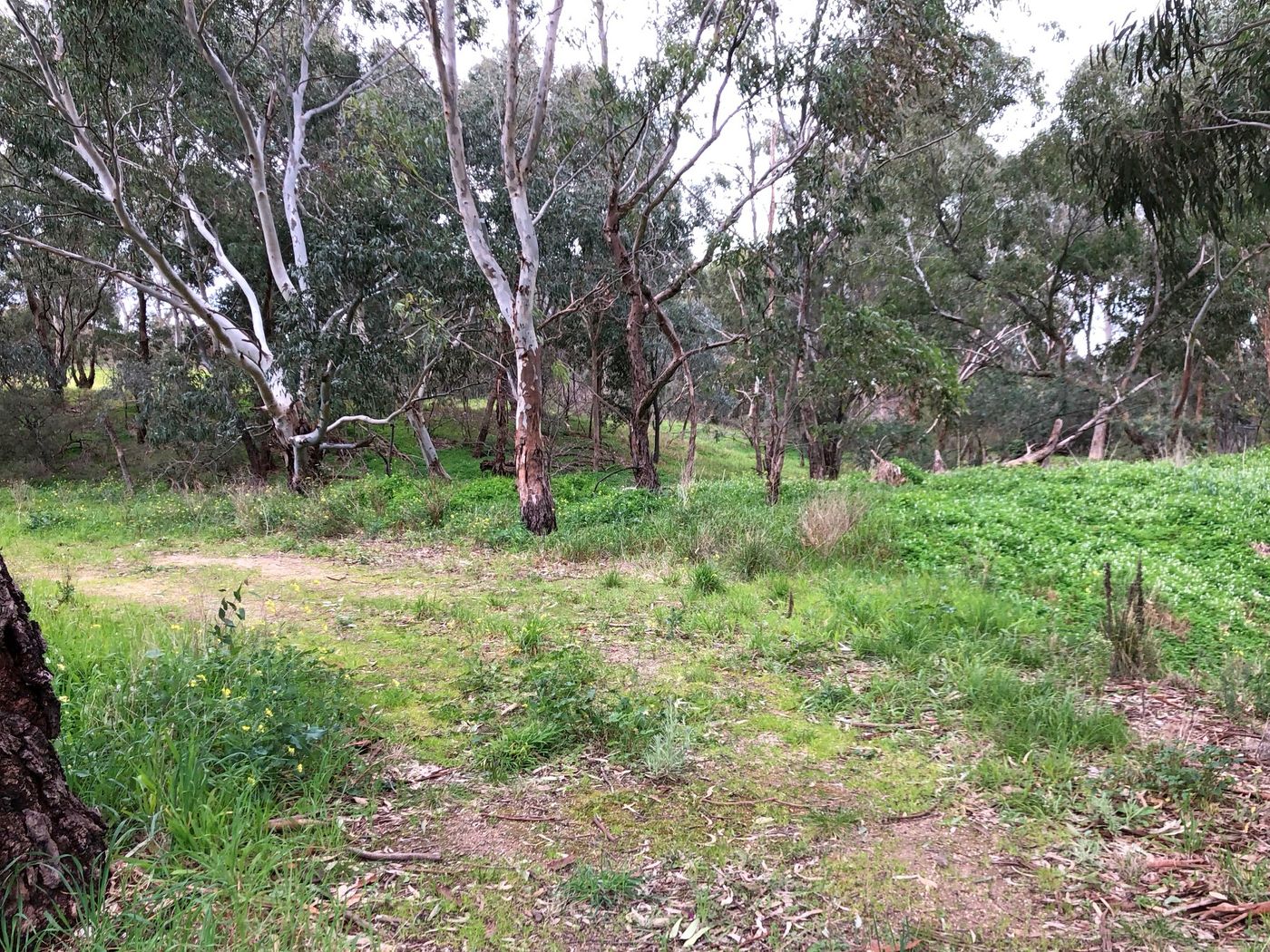 Costa specifically located his brewery near the Darebin Parklands to take advantage of the area's microflora. 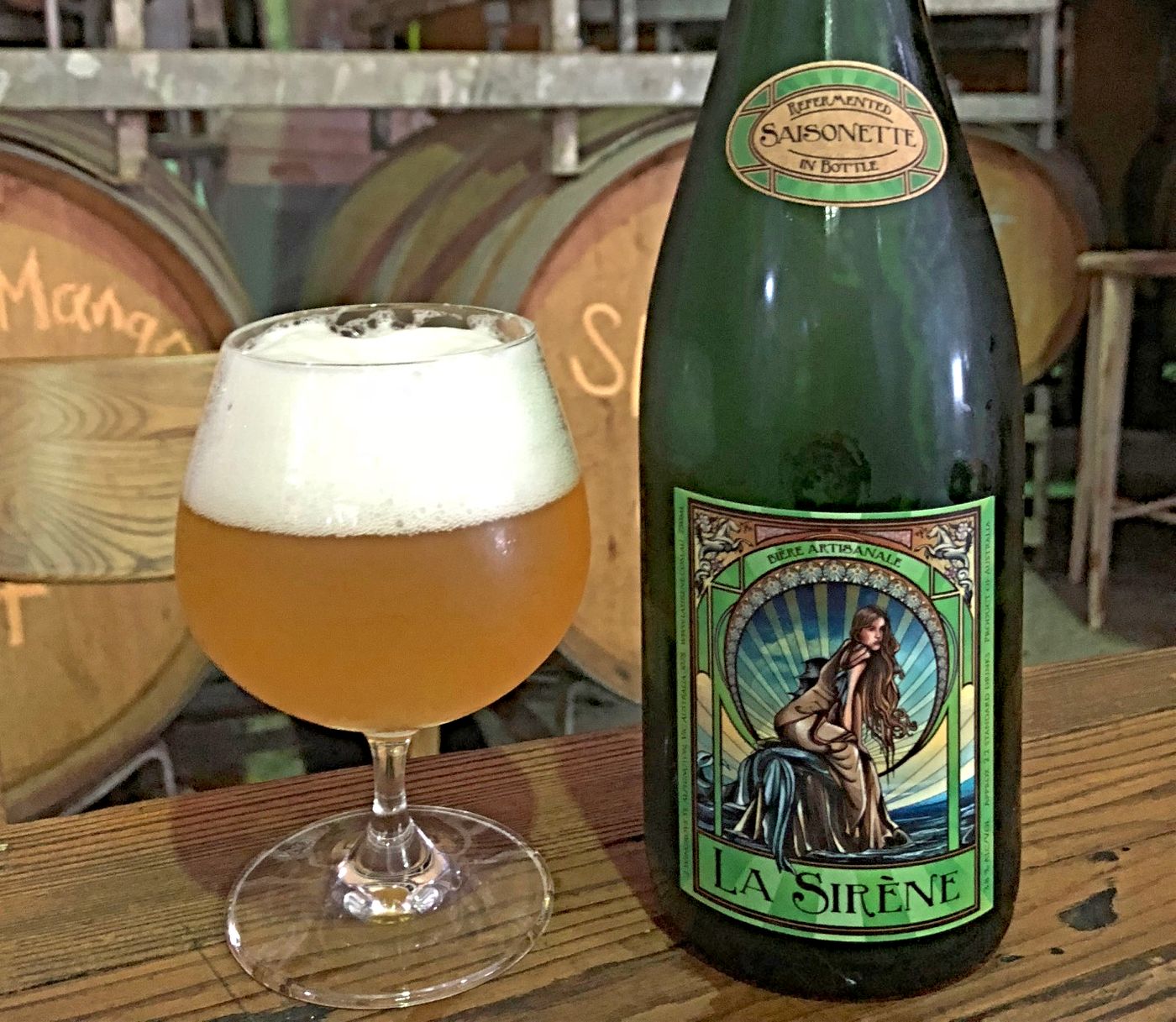 Their saison and table saison are brilliant in our opinion, exhibiting a wonderful blend of fruit, spice, funk, acidity, and dryness from wild fermentation (plus a little light struck character from green bottles). 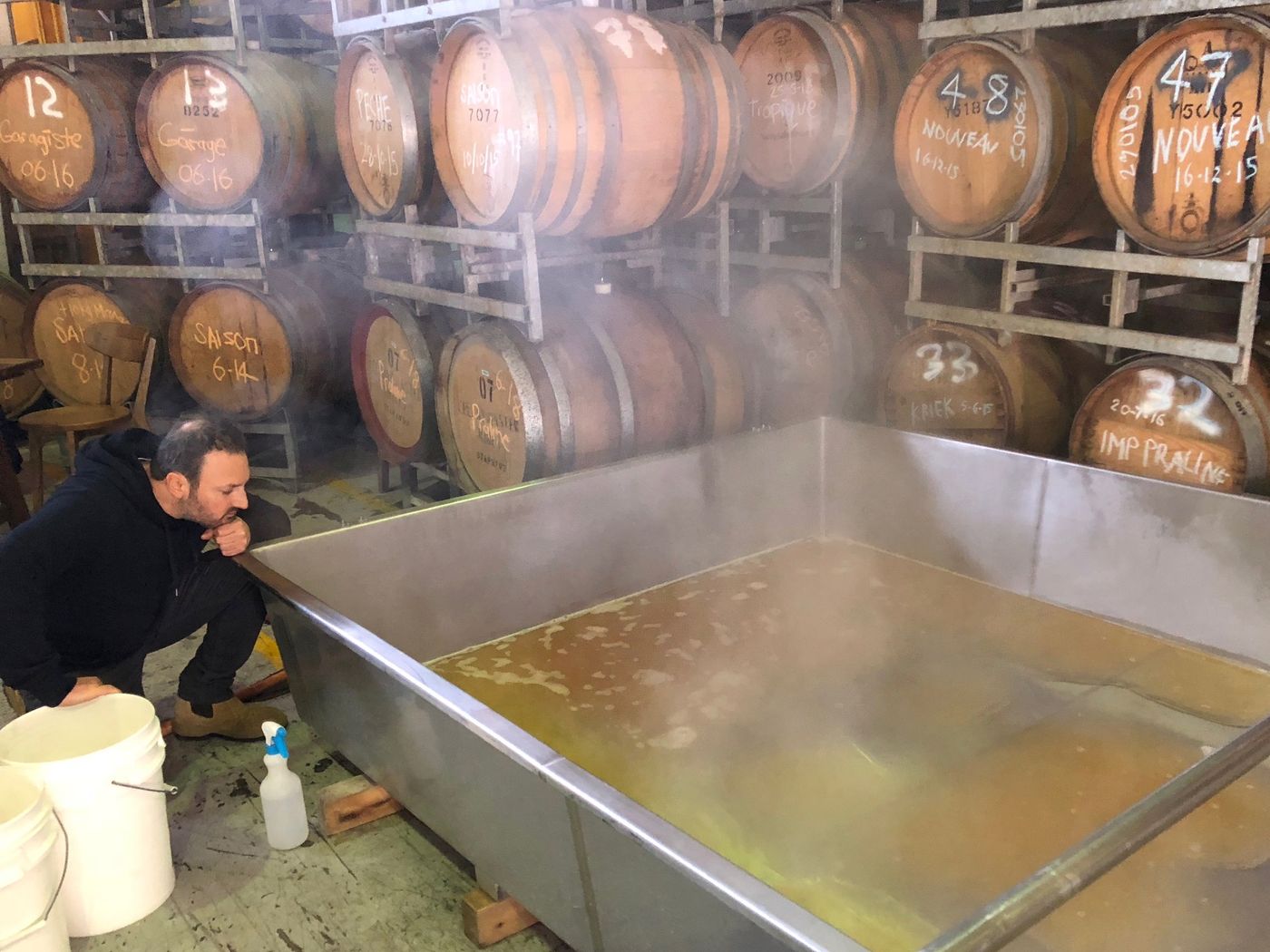 For the 100% spontaneously fermented beer, we brewed a simple wort with Australian barley and wheat and aged hops from Australia and our barn at Jester King. The wort was chilled overnight in La Sirène's coolship. The overnight temperatures in Melbourne during the Australian winter are pretty comparable to what we experience in central Texas with lows around 40 degrees Fahrenheit (4 degrees Celsius). 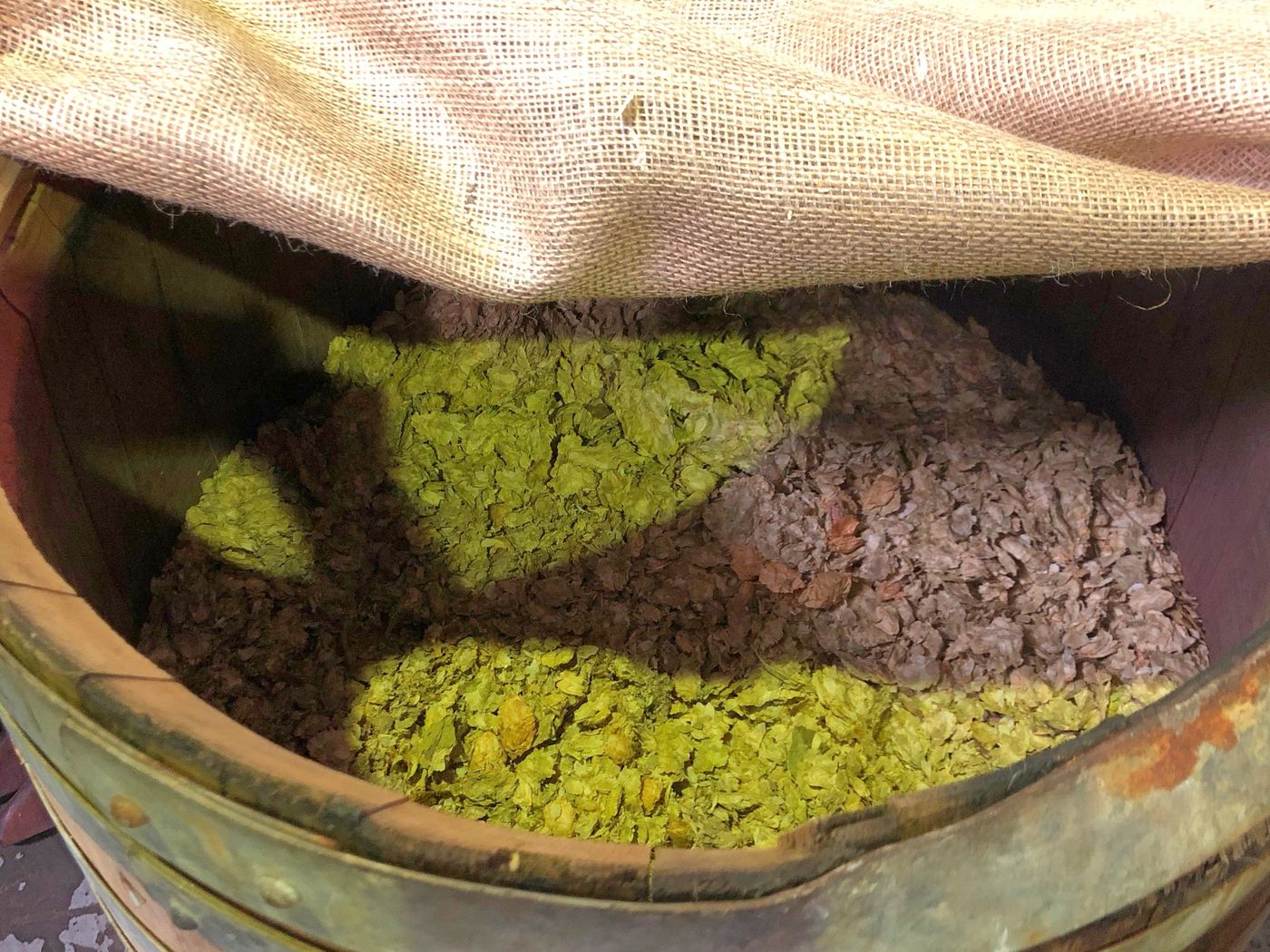 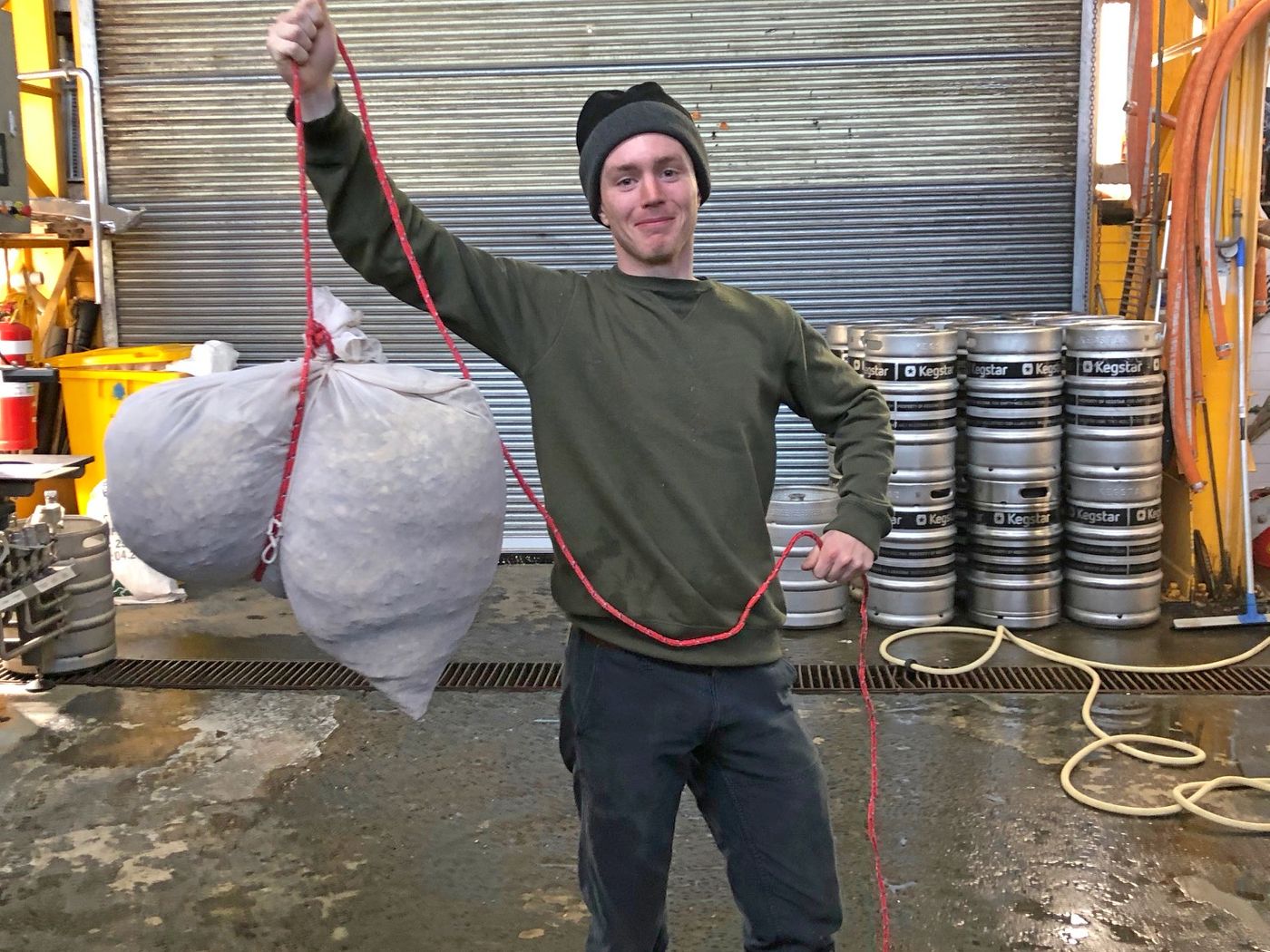 Liam readying the aged hops for the boil. 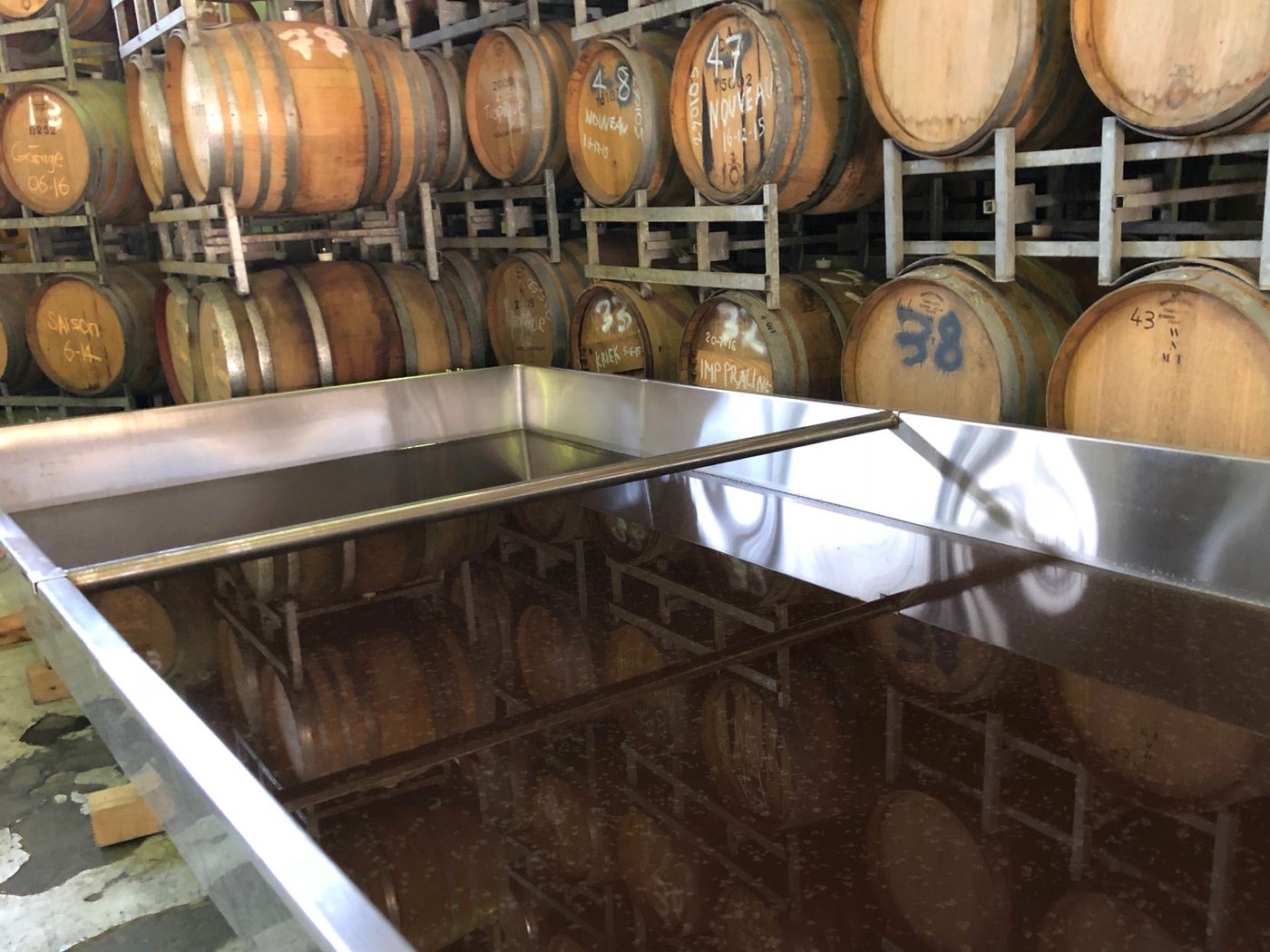 Chilled wort in the coolship the next morning. 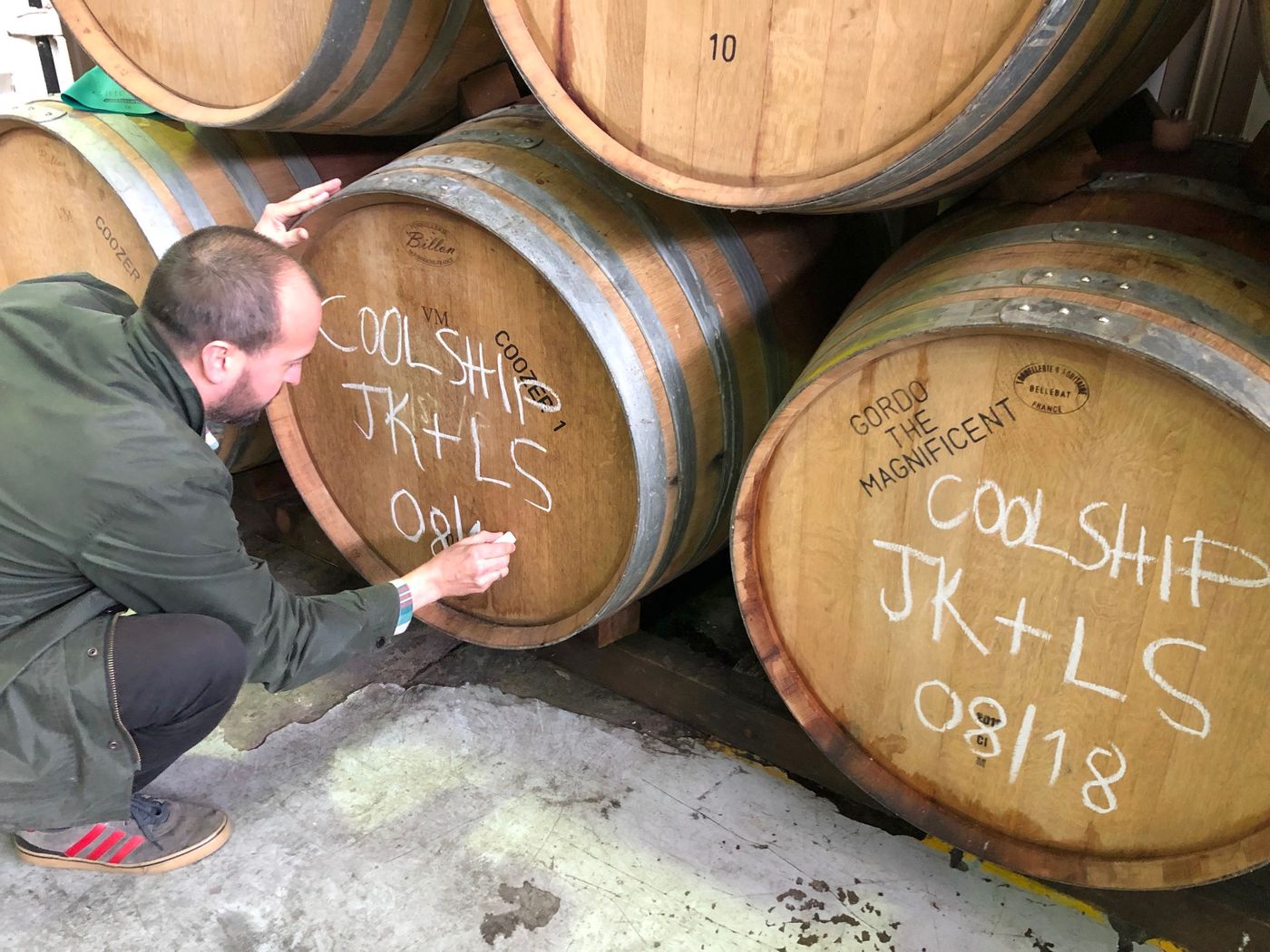 The next morning, the wort was racked to oak puncheons for spontaneous fermentation. We'd expect for the beer to be mature sometime during the next one to two years. 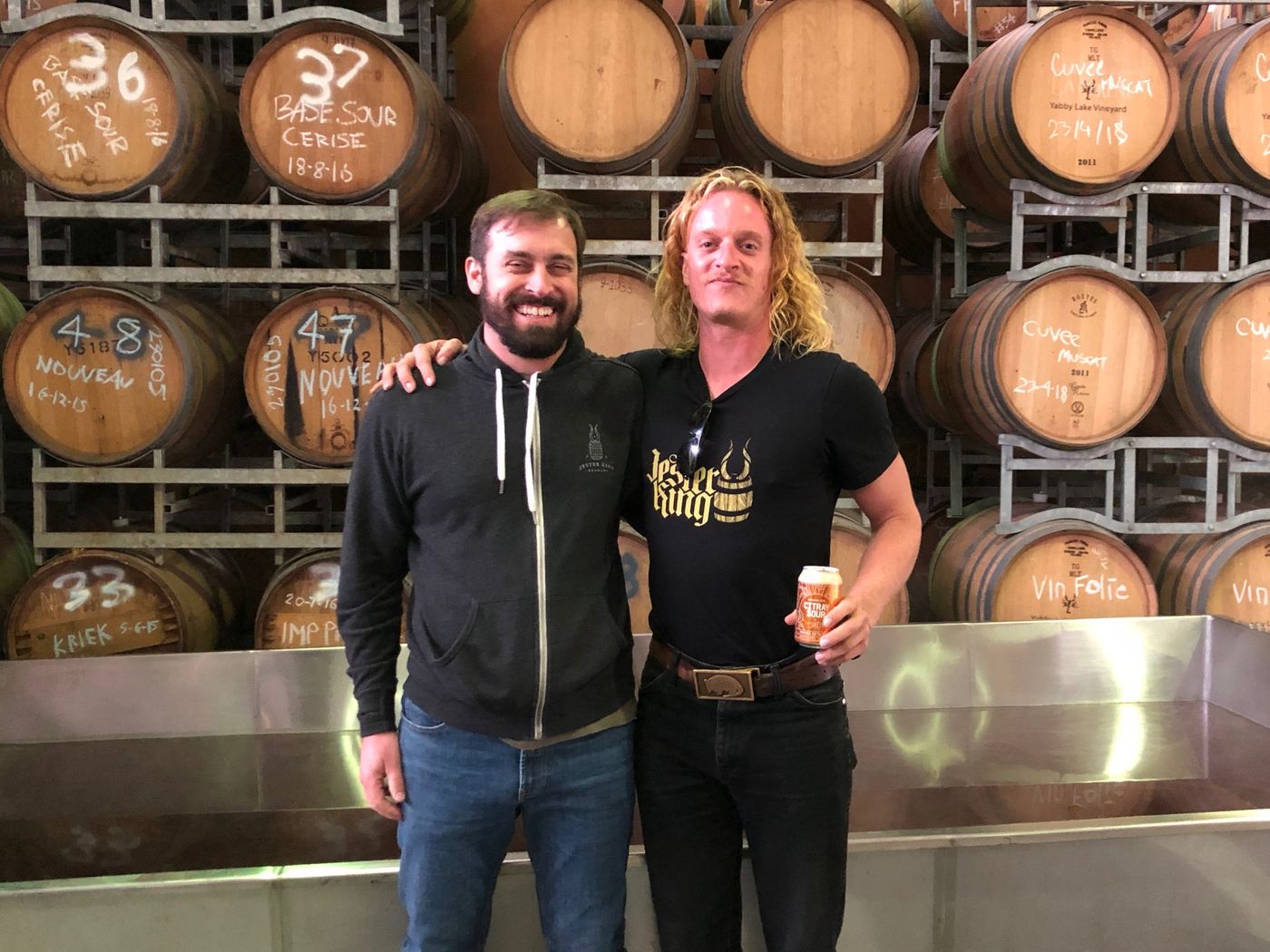 Coincidentally, Farmer Peppy of Jester King was in Australia at the same time learning about permaculture and stopped by for the brew!

For the hoppy farmhouse ale, we brewed with a pretty substantial dose of Australian Ella and Enigma hops. For fermentation, we racked the wort into an open-top stainless vessel and open-top puncheons, then pitched cultures from Jester King, La Sirène and Wildlife Bakery in Melbourne. The idea was simply to see what this blend of microbes, plus microbes from the ambient air would produce. The hoppy farmhouse beer should be ready in a matter of months rather than years. 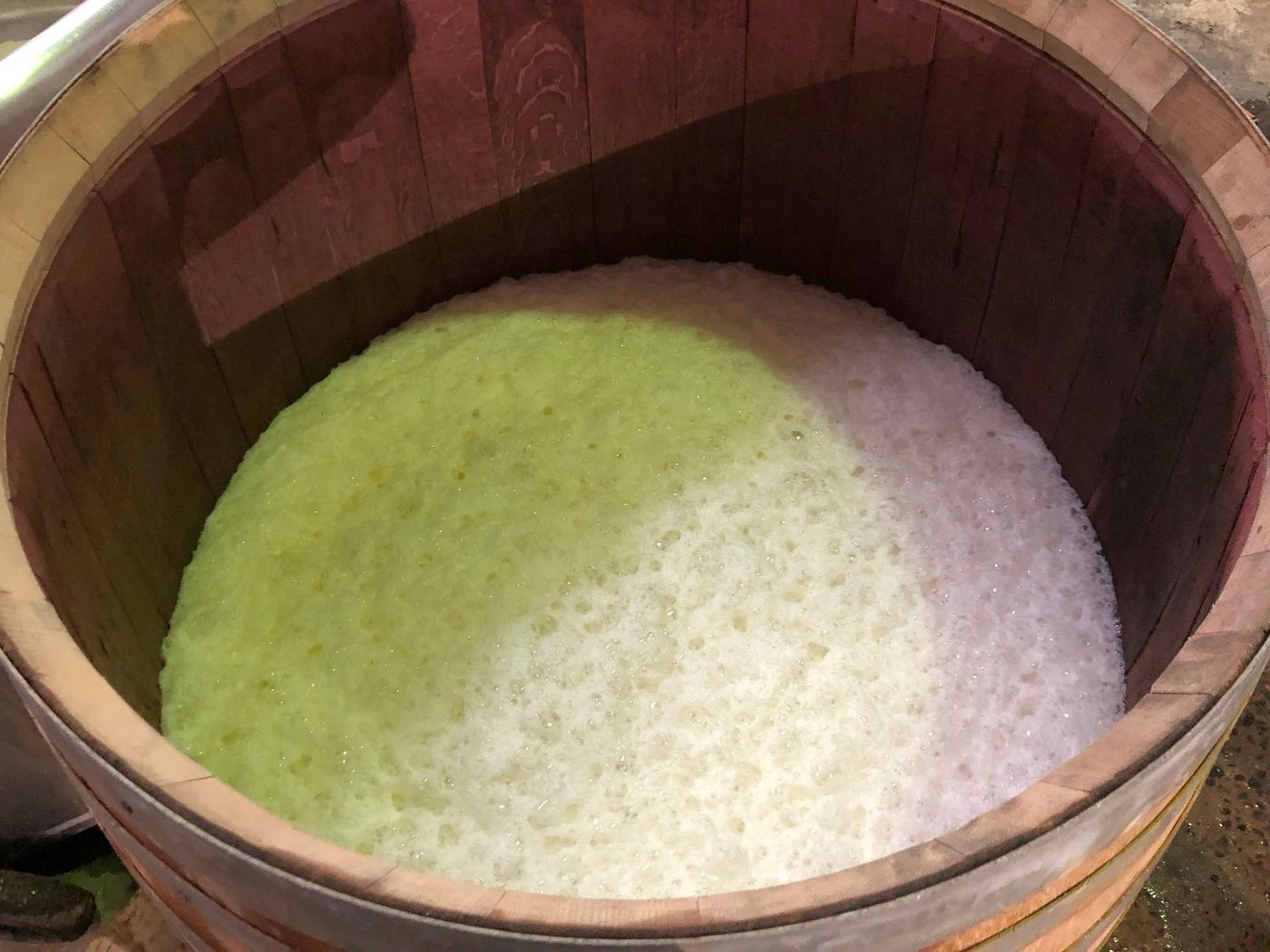 Wort transferred to an open-top puncheon barrel for fermentation 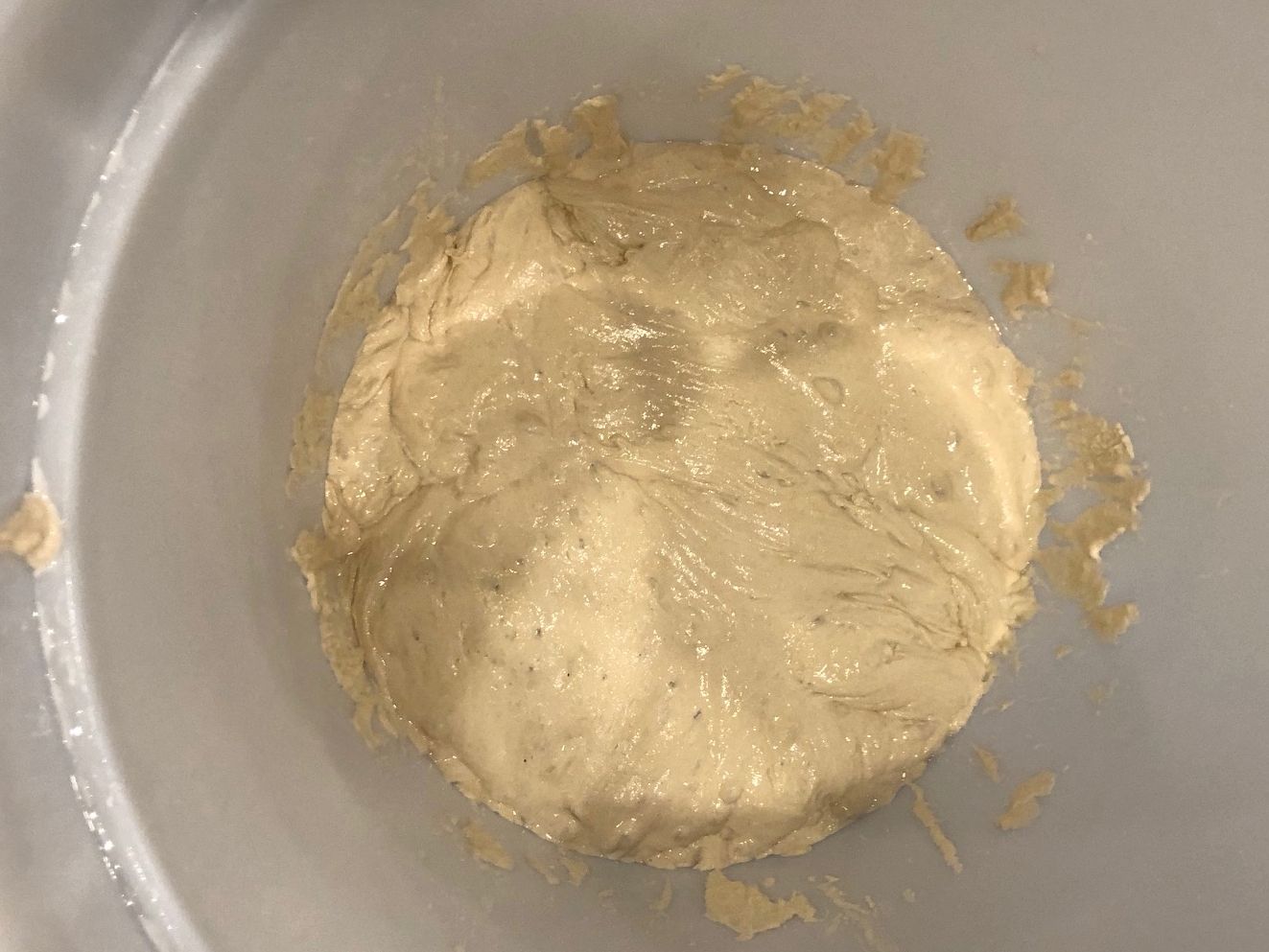 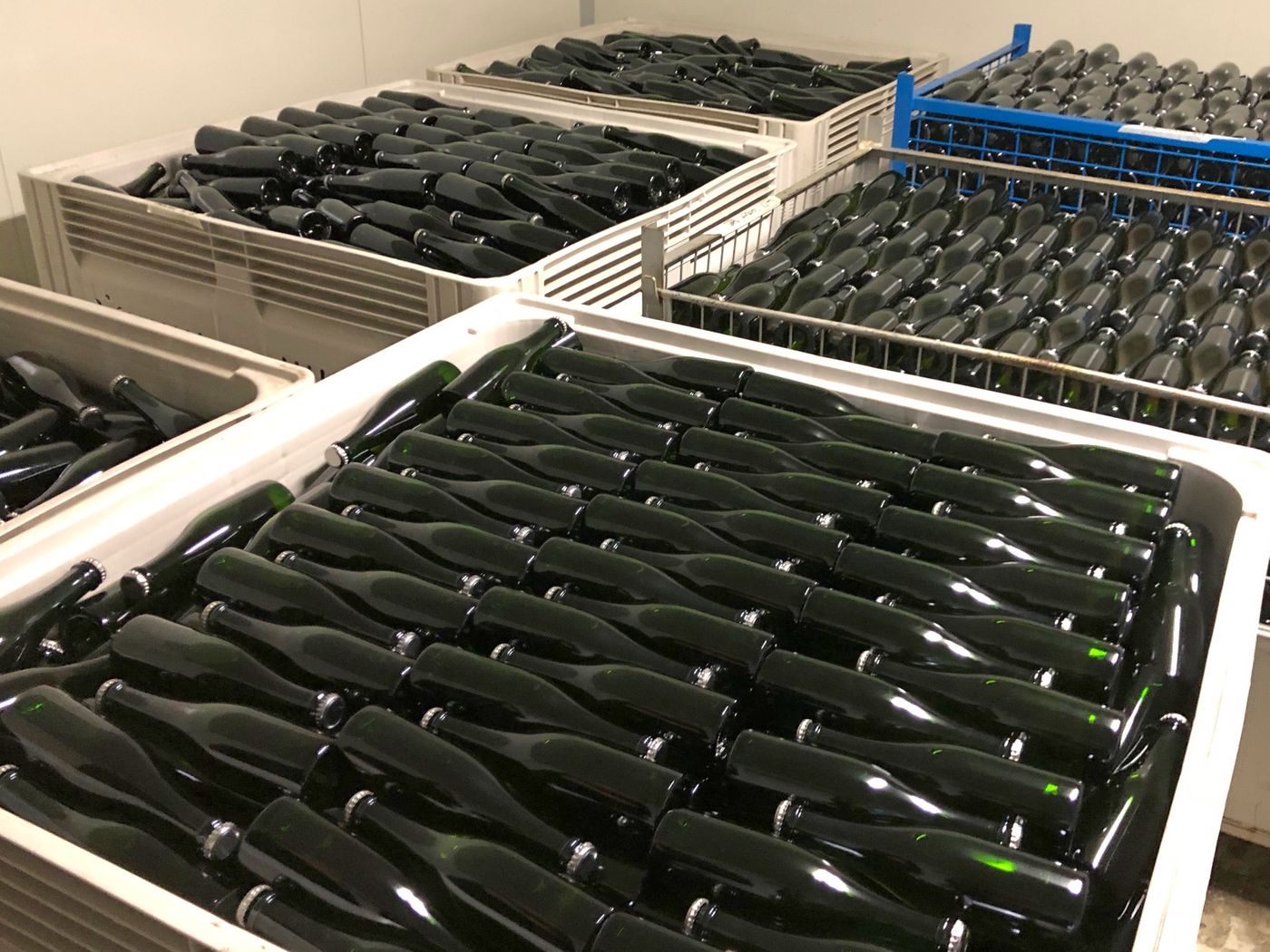 Both beers will be naturally refermented and matured in bottles and kegs before release. We're particularly fond of how Costa uses the Pétillant Naturel or Pét-Nat approach for conditioning. At Jester King, we ferment the beer to complete dryness, then add priming sugar for refermentation. By contrast, Costa will cold condition his beer with about 8-10 specific gravity points left in primary fermentation, bottle the beer, then allow refermentation of the residual sugar from primary to condition the beer. We're keen on experimenting with this technique at Jester King at some point having never tried it before.

We learned a lot during our visit to La Sirène and came home very inspired. Their process is about as simple and beautiful as it gets when it comes to making beer. We can't help but continually find ourselves attracted to breweries that create wonderful complexity through simple processes that depend on time and patience. We've also noticed a trend where we're inspired by brewers like Costa with backgrounds in wine making.

We'd like to thank Costa and the team at La Sirène for being such wonderful hosts during our visit! They made us feel like family during our stay and introduced us to their beautiful city and countryside. We're excited to soon see La Sirène again at Shelton Brothers The Festival in Denver, Colorado this fall!