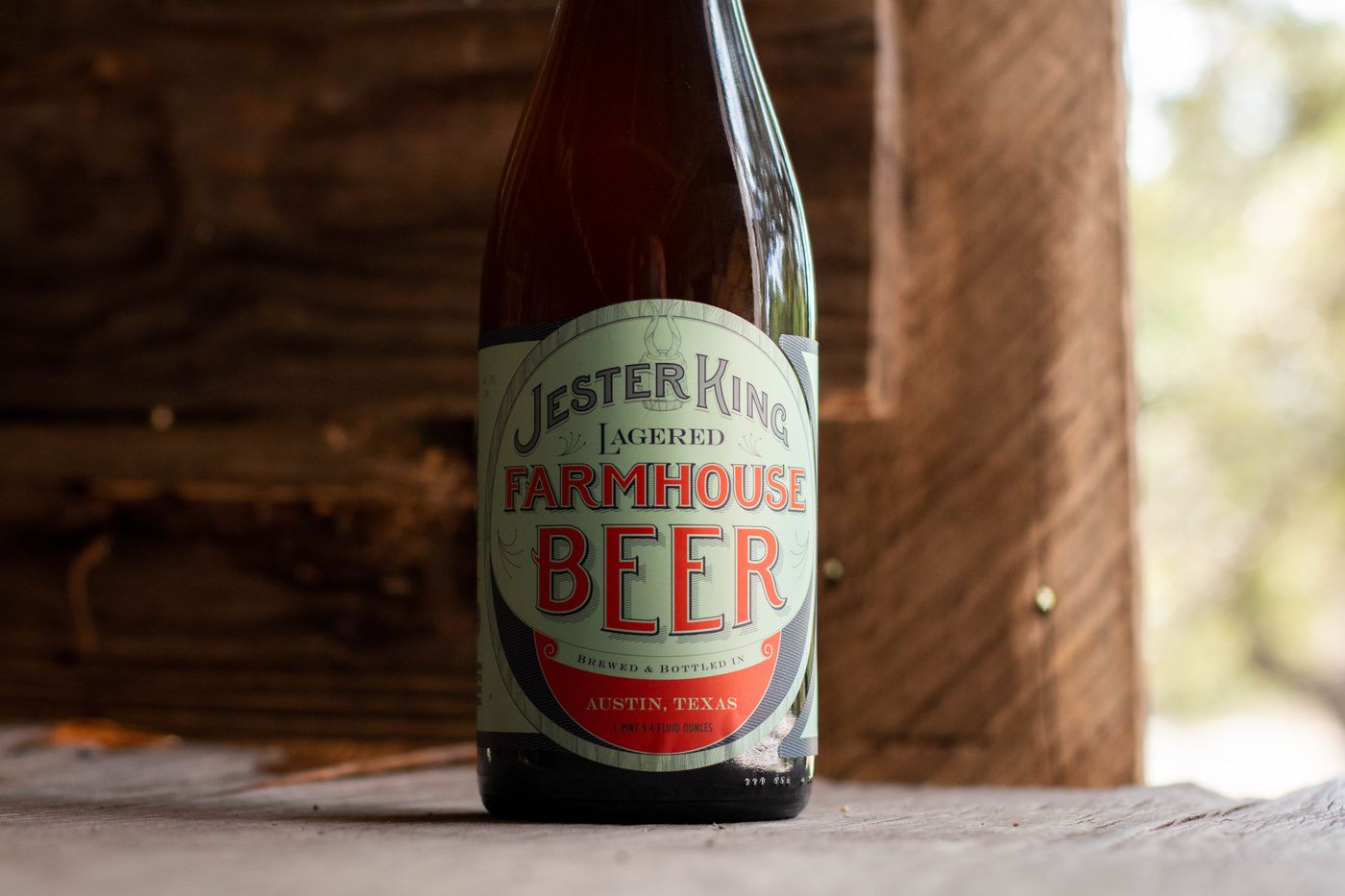 This Thursday, September 5th when our Tasting Room & Kitchen opens at 4pm, we're pleased to release a new beer we've simply called Lagered Farmhouse Beer. It's brewed with Texas grown and malted Jimmy Red Corn from TexMalt in Fort Worth, and lagered in stainless steel at Jester King for six weeks prior to bottle/keg conditioning.

We've loved drinking and have been inspired by pale lagers nearly since the time we opened in 2010, and especially for the last 5 or 6 years. We're lucky to be neighbors here in Austin with some of the best lager brewers in the country. We've collaborated with Live Oak Brewery in Austin to make Kollaborationsbier (Live Oak Pilz wort fermented at Jester King with our mixed culture), as well as with Creature Comforts in Athens, Georgia to make Mutualism (pale lager with grits conditioned with mixed cultures from both our breweries). All of this has led us to make our own take on a pale lager, specifically an early American corn lager.

As far as our decision to focus on early American corn lager, we've been intrigued by corn as an ingredient for adding flavor and complexity to beer. As Jester King Senior Brewer Sean Spiller (who recently left to open a brewery in Houston) writes, "There’s a stigma that exists against corn beers. When most people think of a beer made with corn, they’re thinking about those macro-brewed adjunct lagers that use cheap corn to lighten the body and flavor of the beer. We find this frustrating, especially knowing that corn can be so much more than that. When we think of corn, we think about food. Delicious, rich, sweet flavor. It’s unique aroma. It’s history." When we went in search of Texas corn to use for the beer, we encountered a variety called Jimmy Red. It's an heirloom variety dating back almost 100 years, and was historically used to make whiskey. We found a malted variety of it from TexMalt in Fort Worth.

We brewed the beer with well water, liberty hops, Pale Moon malted barley from Blacklands Malt in Leander, Texas (66%), and malted Jimmy Red corn (33%). The grist for the beer was 100% grown in Texas, and malted at small, independent malt houses. We primary fermented in stainless steal with our mixed culture of brewers yeast, and wild yeast and bacteria. After primary fermentation, we lagered the beer for six weeks near freezing temperature. According to the Oxford Companion to Beer by Garrett Oliver, lagering comes from the German word "lagern" meaning "to store". "Before the days of mechanical refrigeration, German brewers stored beer in cool, deep caves, especially during the hot summer months", writes Oliver. After lagering, we naturally conditioned the beer through refermentation in bottles and kegs.

As Sean Spiller writes, "The end result is a wonderful, crisp beer with a unique aroma of malted corn and funky fermentation. The long cold aging made this finished beer very clear, although in normal Jester King fashion it was naturally conditioned in bottles and kegs, so some sediment is normal."

Lagered Farmhouse Beer was brewed in May and packaged in July. It's 5.5% ABV and will be available by the glass and in bottles to go at Jester King (750ml x $13). We have about 3,000 bottles available. There's no bottle limit, and we anticipate the it will see distribution. The artwork is by Josh Cockrell and the photography is by Granger Coats.