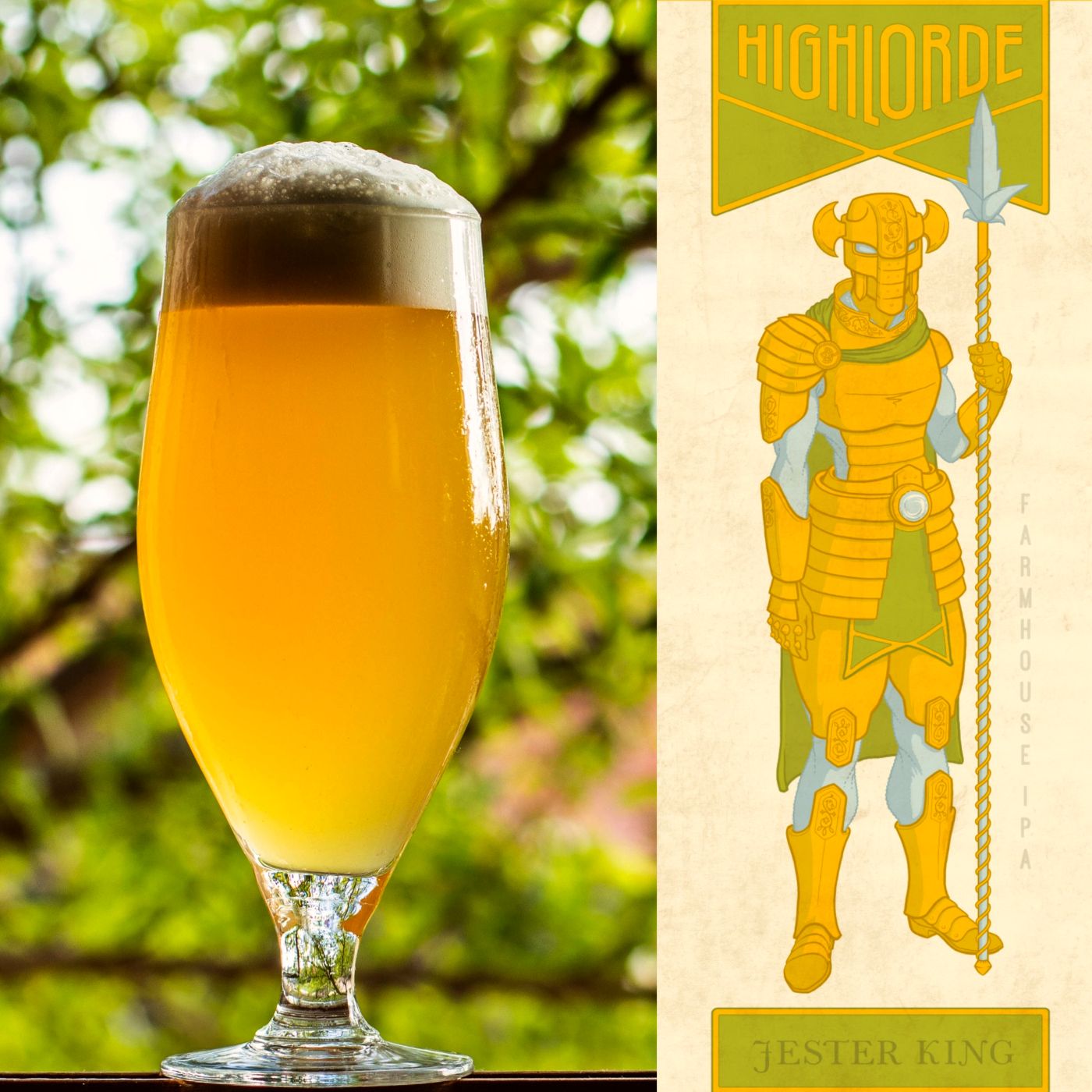 When we open at 4pm this Thursday, we'll be debuting a brand new beer called Highlorde Farmhouse IPA! Highlorde is our take on an American-Style India Pale Ale. It was brewed with natural, unfiltered well water, Texas malted barely from Blacklands Malt, small amounts of wheat, rye, oats, and spelt, and Millennium, Simcoe and Amarillo hops. It was fermented in stainless steel with our mixed culture of brewers yeast and native yeast and bacteria. Prior to packaging, it was dry hopped with Amarillo and Simcoe. Finally, it was 100% naturally conditioned through refermentation in kegs.

Our motivation behind Highlorde is to make somewhat of a new take on Wytchmaker Farmhouse Rye IPA, which is one of our oldest beers (initially released in 2010). When we formulated Wytchmaker back in the day, we were inspired by homebrewer Denny Conn's rye IPA recipe, as well as Bear Republic's Hop Rod Rye. Our desire in 2019 is to make a new farmhouse IPA with a lower ABV and less dominant specialty malt character. However, we still wanted it to retain a firm bitterness and fruity hop flavor and aroma. On a side note, we haven't retired Wytchmaker and still plan to make it.

Highlorde is only 4.4% ABV and finishes at 1.003 specific gravity (0.75 Plato). It's bone dry, bitter, has nice aromatics, and is very drinkable in our opinion. As we've stated many times over the years, we like bitter beer. Our inspiration comes from beers like De Ranke XX Bitter and De la Senne Zinnebir, which have a pronounced bitterness. If Jester King is going to do our take on American-style IPA, it is going to be bitter. For us, if we're going to sit down and drink three or four glasses of beer with friends, we'd prefer something that's dry and bitter or dry and tart, especially in a warmer weather environment like Texas.

Another thing that's a little different with Highlorde is that we've decided to make it draft only, at least for now. Unlike a lot of our beers which depend on time and patience, we believe it's best to drink Highlorde fresh. All our beer is wild, and given enough time, you'll start to see funkiness and tartness begin to develop. It's also worth mentioning that all IPA, as well as all beer for that matter, was "wild" historically. Pure culture or monoculture fermentation was only developed in the 20th century. For the vast majority of brewing history, all beer was wild. People would simply drink certain styles of beer fresh before they started to develop some tartness and funk.

Highlorde will be on draft in our restaurant and tasting room starting this Thursday, and will be distributed around Austin and a few other places in Texas by our friends at Flood Independent Distribution. We hope you enjoy!

"The art concept for Highlorde is a return to the character driven art and naming for our earliest beers like Petit Prince and Noble King. This initial rendering is a merely an introduction to the character. You can expect to see an illustration in line with our early art stylings as more develops with this beer...

Hungry for swift victory, The Great Battle Lion paces back and forth ahead of the formations. All fine kings possess such bravery. His is not a fool's bravery either, the sort that is briefly held through naivety, for atop his back rides the true ruler, absolute defender, and Highlorde of The Kingdom. Her golden armor engulfs them in a brilliant aura as if enchanted by the vines that proudly adorn its surfaces. Light dances in her every movement, stunning the wise with fear and taunting the foolish to dare and strike at her. Those that choose to recklessly engage the matriarch will quickly fall, for the kindness and love she possesses as a ruler is mirrored by her ferocity and fearlessness as a warrior.

The king well knows the certainty of victory tied to that truth. He stops pacing and all eyes shift up to The Highlorde. She slowly and silently raises her Highblade, pointing it towards the enemy. The battle begins…"