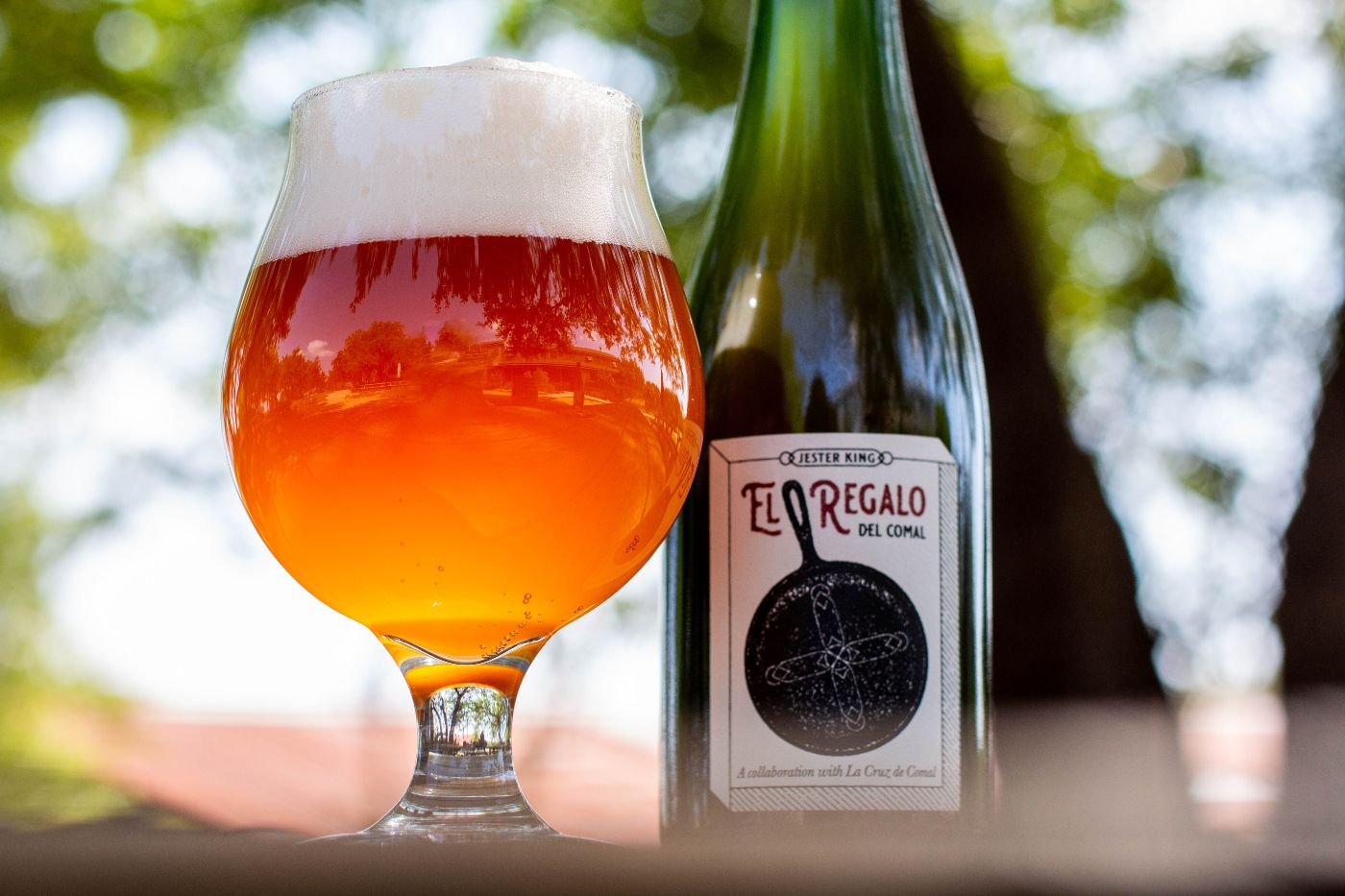 A little over four years ago, we began a special spontaneous fermentation project with our friend Lewis Dickson -- the Proprietor of La Cruz de Comal Wines in Canyon Lake, Texas (about 40 miles south of Jester King). The project was based on the notion of "microbial terroir". That is, we wanted to see how the microbes in Lewis's vineyard would spontaneously ferment our beer. In wine making, the concept of terroir or "sense of place" is based on a myriad of factors such as climate, soil, topography, etc. What sometimes gets overlooked in our opinion, is the contribution of the microbes in the vineyard to the character of the wine. This is especially true in wines like Lewis's, which are 100% spontaneously fermented. The microbes on the grapes are responsible for fermentation, without the introduction of any isolated cultures from a laboratory. The wine achieves a uniqueness to its surroundings and connection to the vineyard based (at least in part) on the microbes that travel into the winery on the skins of the grapes. The tie that binds the wine to the vineyard is an invisible microbial one.

To test this, we drove our coolship out to La Cruz de Comal every winter for the last four years, filled it with wort, and let the wort rest overnight in the vineyard. The next morning, we emptied the coolship and drove the wort back to Jester King for 100% spontaneous fermentation in oak barrels. Four years later, we finally blended, bottled, and naturally conditioned the beer.

To our palates, the results of the experiment are quite intriguing. Despite brewing the same simple, Lambic-inspired wort for both places, the beer fermented with the naturally occurring microbes from La Cruz de Comal has a unique character, which we haven't encountered in any of our other spontaneous beers at Jester King. By no means is this a conclusory study, and there are probably other variables we aren't accounting for, but we find El Regalo del Comal to be quite unique and lending at least anecdotal credence to the concept of microbial terroir.

Like many of the beers we choose to make, its an exercise in friendship as much as it is in beer making. We met Lewis Dickson around 2012, and instantly became infatuated with his wines. As young, aspiring wild beer producers at the time, we had a bit of eureka moment when we tried La Cruz de Comal wines. Because of Lewis's completely natural approach to wine making (Lewis is fond of saying, "My secret is, there is no secret"), the similarities to wild beer making are uncanny and profound. This explains why we've felt a close kinship to natural wine makers over the years. We hope Lewis doesn't mind us saying that he's sort of our spirit animal at Jester King. We've rarely encountered such passion, commitment, and excellence when it comes to wild fermentation, coupled with an amazing gift of communication about why it's important. We're grateful Lewis let us drag our coolship out to his vineyard every year for the last four years, and we're honored to call him a friend.

We had planned to do a killer beer and wine dinner with our friend's at Aviary Wine & Kitchen in Austin to debut El Regalo del Comal. That will have to wait. In the meantime, El Regalo del Comal is now available at Jester King for curbside pickup. Order online (https://www.toasttab.com/jesterkingbrewery/v3) or call 512-661-8736. El Regalo del Comal (5.4% ABV) is available in 375ml bottles ($22). We have about 1,900 hundred bottles available. No bottle limit. We're open for pickup 7 days a week from 12-8pm.

El Regalo del Comal art is by Josh Cockrell. Photography by Granger Coats. Special thanks to Jester King Operations Manager Matt Piper for orchestrating the wort getting to and from La Cruz de Comal for the last four years. 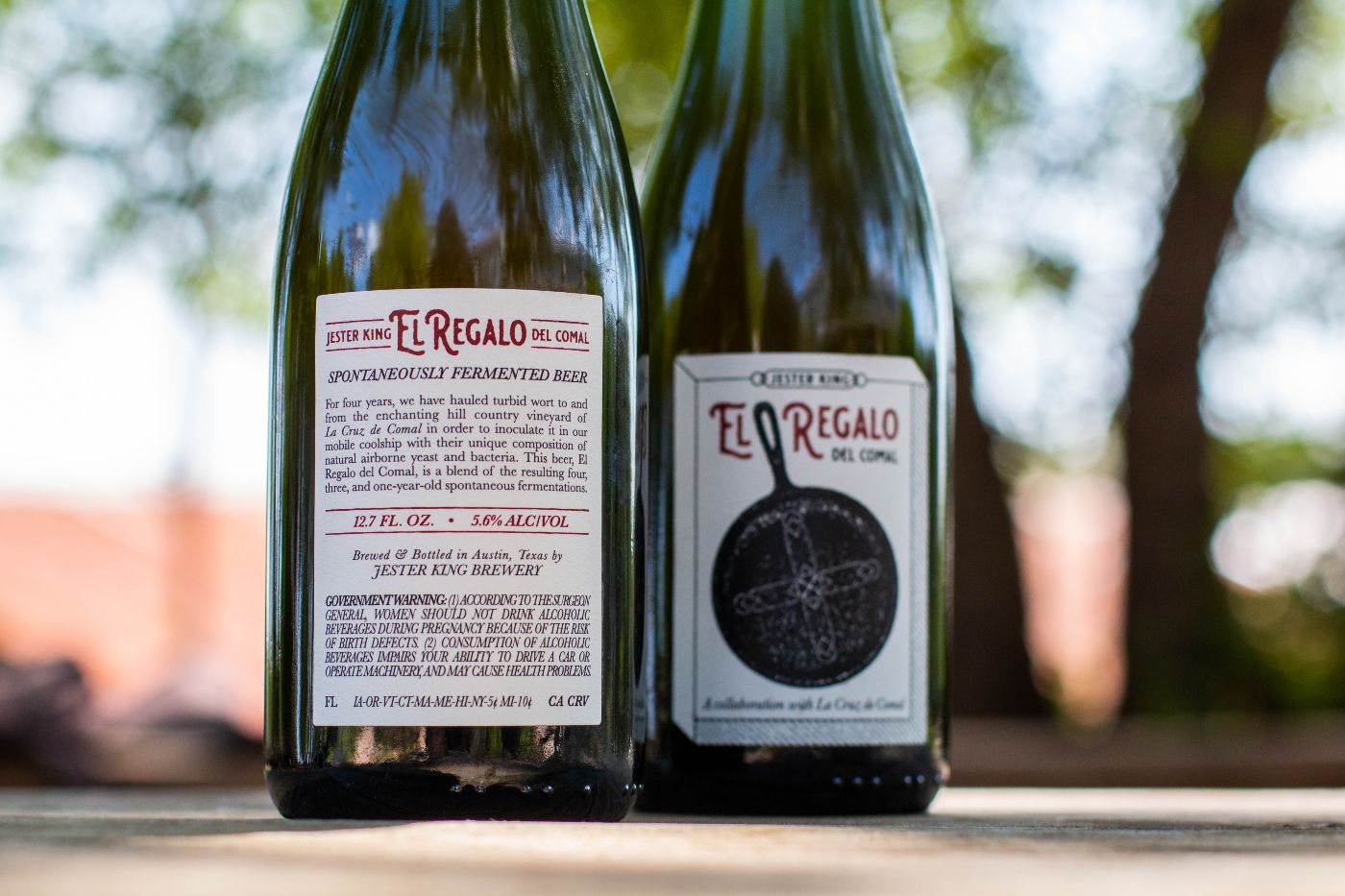 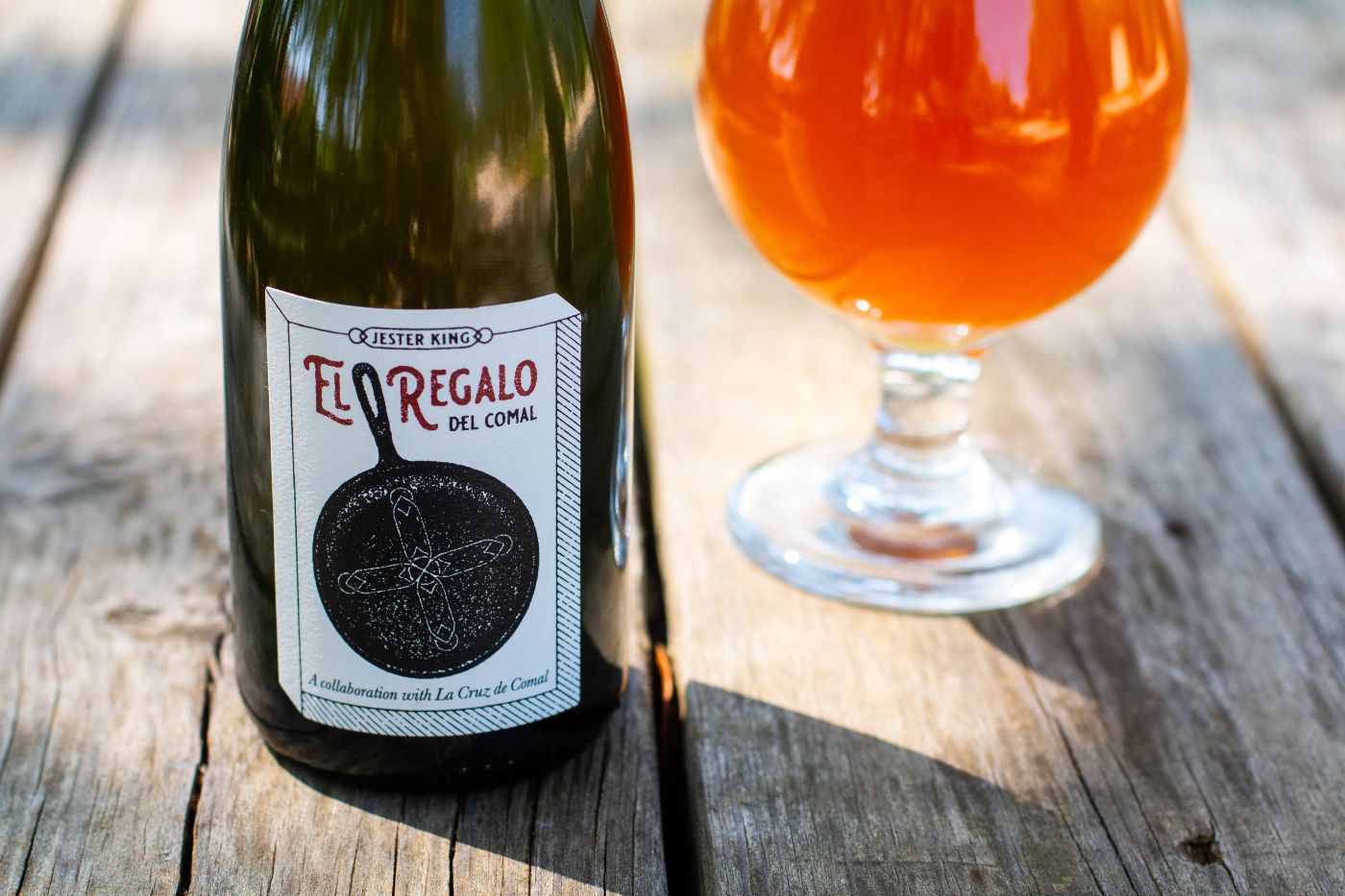